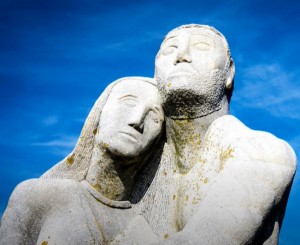 St. Clair was born in Jamestown, North Dakota. The following year his family moved to Grand Forks, North Dakota, a larger city with much greater musical and cultural opportunities than his birthplace. The musical environs of Grand Forks served as the foundation for his life in music. The city boasted its own symphony orchestra, a major university with an active music department, a concert series featuring prominent soloists, and a school system that emphasized music education. For years he sang in both the Centralian concert chorus of his high school (Grand Forks Central High School) and the sanctuary choir of the church (First Presbyterian) which he attended as a child and adolescent. He also sang in the Choral Union, a collaboration between the University of North Dakota and the Grand Forks community. It was these singing experiences that imbued him with a love of choral music which has carried him throughout his musical life, with dozens of choral compositions to his credit.

Music ran through his family. His maternal great-grandfather Ludvig Svendsen Bogen played in the Norwegian King's Band and his grandfather Sven Fredrik Bogen was a band conductor who played and taught many different instruments; his maternal grandmother was a piano teacher who was reputed for being able to transpose any song into any key. His paternal grandmother was a gifted pianist. His father, Foster York St. Clair (1905–1994) – a Harvard-educated English literature scholar, university professor and poet – and his mother, Elna Ruth Bogen St. Clair (1912–1974) – a business college teacher – were both amateur musicians and classical music-lovers. St. Clair from a very early age fell in love with the music of Mozart, Mendelssohn and Tchaikovsky, which were played in his home on fragile 78-rpm records. At age 4 he began taking piano lessons. By age 16 he was starting to write music, mainly for chorus and organ, inspired by Gustav Holst, Flor Peeters and Paul Hindemith.

A turning point in his musical life came in 1963 when he attended on scholarship the International Music Camp in the International Peace Garden on the North Dakota-Canada border. Amidst the intense musical environment, his performances at the piano, together with his then piano teacher Paul Lundquist, were noticed by Professor Earnest Harris, head of the piano department at Moorhead State College (later renamed Minnesota State University Moorhead). Harris, steeped in the pedagogic tradition of Theodor Leschetizky and Carl Czerny and a former pupil of Leonard Shure, gave him a full scholarship to study piano, culminating in his brilliant senior solo recital in Grand Forks the following spring, playing the music of Bach, Beethoven, and Brahms.

Early in his music education, St. Clair was enamored of the music of Edvard Grieg, from whose music he acquired a love for miniaturism and compact musical invention. Few of his works last longer than 15 minutes (with some noteworthy exceptions). He was also deeply moved by the music of Robert Schumann, especially the great C Major Fantasia, opus 17. In college, he became engrossed in the piano music of Mozart, Schubert, Schumann and Bartok, playing and absorbing their music over and over again on his Poole upright piano (which he tuned himself since he could not afford a professional piano tuner) in his dingy second-storey Cambridge apartment. This way he acquired a deep love for classical-romantic music, which is strongly present in his own compositions.

In 1970 St. Clair made a solo piano appearance in a recital of his own music in Newburyport, Massachusetts. Reviewer Ned Brown made the following prophetic observations:

We admired St. Cair's expansive genius, his dynamic keyboard skill and his personal modesty. At 24, Richard St. Clair is firmly launched on a musical career which offers great possibilities.[1]

St. Clair, following in his father's footsteps, began his studies at Harvard University in Cambridge (Massachusetts) where in 1969 he earned his Bachelor of Arts (A.B.) with honors in music composition, the first of many Harvard students to write a musical work in lieu of a thesis. While an undergraduate he studied piano techniques (sight-reading and figured bass) with Luise Vosgerchian, harmony with James Haar and John MacIvor Perkins, counterpoint with James Yannatos and Alejandro Enrique Planchart, form and analysis with Luciano Berio, and composition with Billy Jim Layton and Leon Kirchner. In graduate school at Harvard he went on to earn his Master of Arts (A.M.) in 1973 and his Doctor of Philosophy (Ph.D.) in 1978, both degrees in music composition. During his student years he was awarded several prizes for his compositions. At Harvard he studied composition with Roger Sessions, Leon Kirchner, Earl Kim, and David Del Tredici. He studied piano privately with Paul Lundquist, Earnest Harris, and Leonard Shure. As a graduate student he was persuaded by a fellow student at Harvard to study piano with Margaret Chaloff in Boston. After a few lessons it became evident to him that she was grooming him for a career as a concert pianist, against which St. Clair rebelled and decided to continue his aspirations as a composer. He made his debut as a composer with his performance of his avant-garde Piano Piece no. 1 at the Marlboro Music Festival in 1967 as an invitee of his teacher, Leon Kirchner; there he was encouraged by Director Rudolf Serkin to continue to pursue a career in composition. Serkin's laconic comment on St. Clair's Piano Piece No. 1, "It has line." Both Shure and Serkin discouraged St. Clair from pursuing a career as a concert pianist, though St. Clair occasionally performed his own piano compositions in concert. Although his student years were turbulent, he emerged as a successful composer of broad stylistic tastes.

Of his 1994 freely atonal cycle Moon Flowers: Album of 50 Haiku-Moments for Solo Piano on the occasion of the 300th anniversary of the death of the great haiku poet, Matsuo Basho (1644-1694), noted haiku poet Dee Evetts wrote

Richard St. Clair performed his Moon Flowers: Album of Haiku-Moments for Solo Piano. This hypnotic string of phrases was reminiscent (for this listener) of the shakuhachi tradition, 'beads threaded on silence.'[2]

St. Clair's music has been heard far and wide from Colombia to Bulgaria to Japan and across the United States and Canada. Difficult to describe but generally in the broad category of Neoromanticism (music), his music runs the gamut of pure tonality to avant-garde atonality.

Our choir was honored...to perform the premiere of Today's Lord's Prayer, ... [a] spine tingling anthem. It was truly spectacular.[3]

His Piano Pieces no. 1 and no.2 composed in his college years are intensely atonal and show the influence of Karlheinz Stockhausen. Since then, however, he has turned to a more approachable style following the tradition of 20th-century masters including Igor Stravinsky, Dmitri Shostakovich, Béla Bartók and Arnold Schoenberg, the latter who taught his teachers Earl Kim and Leon Kirchner. His Love-Canzonettes and other works for chorus and his many ragtime works for piano are completely tonal and classically conceived, as is his Lyric Symphony and his chamber opera, Taema. His string quartets and much of his other music including his Concertino for Wind Band are tonally more challenging and structurally freer. For instance, his First String Quartet is structured freely around the octatonic scale, as is the second movement of his Symphony for String Orchestra, while his Second String Quartet employs a twelve-tone row.

St. Clair has created a fascinating sound world, both charged and atmospheric. His is a stirring and original voice.[4]

Asian verse has inspired some of Richard St. Clair's most ambitious efforts. Thus it's no surprise that his "Songs from the Chinese", a setting of ten Yuan Dynasty poems scored for voice, flute, contrabass, and piano, is satisfying to hear. One encounters pentatonic touches sprinkled throughout its mildly spiced tonal language, but never to the point of parody. And the wide-ranging textual tone elicits comparably varied approaches to vocal and instrumental writing. Yet there's a charming and heartfelt overall ethos to the cycle that ably binds disparate moods.

In the field of religious music, St. Clair has distinguished himself as a composer of choral Buddhist music. His hour-long Dharma Chant: A Buddhist Oratorio in Three Parts for a Capella Chorus, commissioned in 2016 by the Commonwealth Chorale of Newton, Massachusetts, is a contrapuntal tour-de-force which sets ancient Theravada and Mahayana (Pure Land) Buddhist texts in a mixture of modal/tonal/pandiatonic Western styles.

In 1969 and 1970 he taught piano at the New England Conservatory in Boston (Massachusetts), and from 1973 to 1977 he taught music history and composition at his alma mater, Harvard University. He also served on the music faculty of Phillips Exeter Academy and Phillips Academy (Andover). Since the late 1970s he has lived a mainly reclusive life, occasionally emerging to present his compositions in concert. In the 1990s after a personal crisis, he abandoned his Christian beliefs and subsequently converted to Buddhism. He identifies with the Jodo Shinshu (Shin Buddhist) religious faith.This music came to me spontaneously as I was sitting at the piano. Recorded 6 May 2020 in Cambridge, Massachusetts.