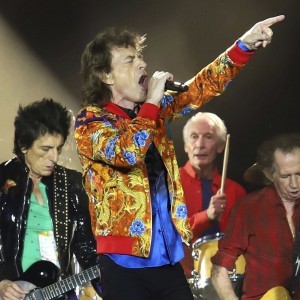 Since 2017, the band had been on the No Filter Tour but had to stop due to the COVID-19 pandemic.[2] The Rolling Stones remotely performed at Global Citizen's Together at Home concert on 18 April 2020, to raise money for healthcare workers and the World Health Organization during the crisis.[3] On 23 April, the band released 'Living in a Ghost Town' online. It was based on 2019 recording sessions and finished remotely. It is their first original material since 2012. Jagger claims to have written the lyrics in 10 minutes.The band fast-tracked releasing the song due to its relevance to social distancing as a method to control the spread of COVID-19.Jagger changed some of the lyrics to refer to the pandemic.

Nidhi Gupta of GQ India labeled 'Living in a Ghost Town' as a 'gentle blues-rock number'. Multiple writers noticed a reggae influence in the song: Will Hodgkinson of The Irish Times described the song as 'a slow-paced chug with a tint of reggae', while Alexis Petridis of The Guardian noted a 'vintage reggae flavour' in the song's 'stabbing, echoing organ',[5] and Louder Sound's Fraser Lewry calling it 'a relaxed piece of reggae-infused rock'.[9]"Living in a Ghost Town" is a song by English rock band the Rolling Stones. It was released on 23 April 2020 through Polydor Records, making it the first Rolling Stones single in four years and the first original material from the band since "Doom and Gloom" and "One More Shot" in 2012. The song has received positive reviews from critics and was recorded during sessions for a forthcoming studio album that the band has been working on since 2015.