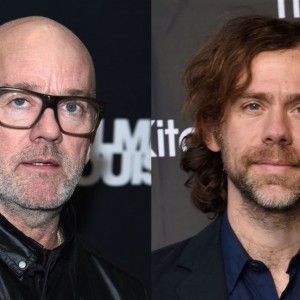 Michael Stipe and the National’s Aaron Dessner performed their new song, “No Time for Love Like Now,” for the Tonight Show Starring Jimmy Fallon on Tuesday. A collaboration with Big Red Machine, which comprises Dessner and Justin Vernon of Bon Iver, Stipe cowrote the song with Dessner and revealed a demo version of the song in March.

In the new clip, Stipe and Dessner, who also produced the song, performed the single together publicly for the first time. However, they filmed their parts separately due to current COVID-19 social distancing directives. The blended split screen showcases Stipe in a room with a mic and Dessner on piano. The visual opens with Stipe wearing a mask before he takes it off to sing.

Stipe looks steadfast into the camera before launching into the song. “Where did this all begin to change?/The lockdown memories can’t sustain,” Stipe sings over Dessner’s plaintive piano melody. “This glistening hanging free fall.”

In April, Stipe performed the song on Late Show With Stephen Colbert and it was officially released earlier this month.

John Michael Stipe is an American singer-songwriter best known as the lead singer and lyricist of alternative rock band R.E.M. throughout its history. He is known for his distinctive vocal quality, poetic lyrics and unique stage presence.

Aaron Brooking Dessner is an American songwriter, multi-instrumentalist and record producer. He is best known as a member of the rock band The National, and co-founder of Big Red Machine with Justin Vernon in 2016 based on a song they wrote of the same name for compilation Dark Was the Night in 2008