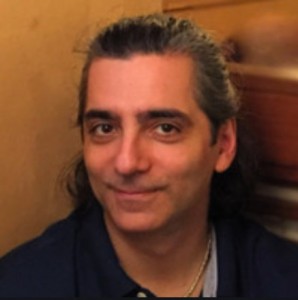 I define Sound composition the music that uses sound as the main form bearing element. It controls and develops to a great extent the morphoplastic attributes of the sound objects used. An Ecriture du Son which is based on sound-to-sound structures, on transformation strategies from one to another as well as on functional classification sound models. The significance of the diatonic interval, harmony and melody ceases to exist.

Holophony signifies my intention to determine a rather general aesthetical frame for my work. Each independent sound (phonos), contributes equally into the synthesis of the total (holos). Thus, Holophonic musical texture is best perceived as the synthesis of simultaneous sound streams into a coherent whole with internal components and focal points.

The dynamic and timbral interpretation goes beyond the traditional way of playing. Virtuosity is expressed through delicate sound manipulations I shall call it a Virtuosite du Son where the interpreter has the dsuty to make sounds and not to play sounds. Emphasis should be given on the precise production of the variable sound possibilities and the right distinction of one to another in order to be able to convey the musical ideas and structure of the piece.

Kokoras is an internationally award-winning composer and computer music innovator. He is Associate Professor at the University of North Texas. Born in Greece, he studied classical guitar and composition in Athens, Greece and York, England; he taught for many years at Aristotle University in Thessaloniki (among others). Kokoras's sound compositions use timbre as the main element of form. His concept of "holophony" describes his goal that each independent sound (phonos), contributes equally into the synthesis of the total (holos). In both instrumental and electroacoustic writing, his music calls upon a "virtuosity of sound," emphasizing the precise production of variable sound possibilities and the correct distinction between one timbre and another to convey the musical ideas and structure of the piece. His compositional output is also informed by musical research in Music Information Retrieval compositional strategies, Extended techniques, Tactile sound, Augmented reality, Robotics, Spatial Sound, Synesthesia.

His compositional output consists of 65 works ranging from solo, ensemble and orchestral works to mixed media, improvisation and tape. His works have been commissioned by institutes and festivals such as the Fromm Music Foundation (Harvard), IRCAM (France), MATA (New York), Gaudeamus (Netherlands), ZKM (Germany), IMEB (France), Siemens Musikstiftung (Germany) and have been performed in over 600 concerts around the world. His compositions have been selected by juries in more than 130 international calls for scores and have received 60 distinctions and prizes in international competitions, among others Franco Evangelisti Prix 2012 (Italy), Destellos Prize 2011 (Argentina), Prix Ars Electronica 2011 (Austria), M�tamorphoses 2010 & 2000 (Belgium), Giga-Hertz Music Award 2009 (Germany), Bourges 2009, 2008 and 2004 (France), Gianni Bergamo 2007 (Switzerland), Pierre Schaeffer 2005 (Italy), Musica Viva 2005 and 2002 (Portugal), Gaudeamus 2004 and 2003 (Holland), Jurgenson Competition 2003 (Russia), Takemitsu Composition Award 2002 (Japan). He is founding member of the Hellenic Electroacoustic Music Composers Association (HELMCA) and from 2004 to 2012 he was board member and president. He is currently secretary of the Interactional Confederation of Electroacoustic Music (CIME/ICEM) and Conference Chair for the ICMC 2015.