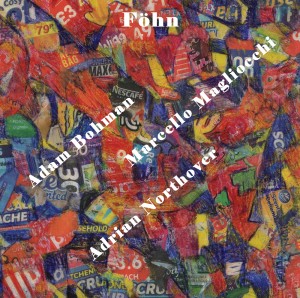 The composition was made in June 2020.

I have been working for some time with Northover and Bohman, two of the most interesting exponents of the current music scene in the world of improvised music / instant composition and contemporary jazz.

I live in Italy, they in England. With the world situation caused by the current pandemic, all our work (concerts) has been canceled, impossible to travel or play in public safely.

However, it is possible to interact through the technologies in use and keep the attention focused on the sharing and realization of our projects.

So I thought of making some compositions that I first sent to Nothover who in turn sent the result to Bohman.

Of all compound things this is "FHON".

My track was all "improvised" and the tracks that inspired Northover and Bohman were superimposed and composed.

It is an instant composition made from "distance".

Northover did editing and mixing.

"FHON" for us represents the wind of "thought" that does not stop .... it could be a wind that has the possibility to "clean up" an empty room from superfluous sounds ...  Marcello Magliocchi

Played with Morphogenesis and Conspiracy in the 90's.
Since then has worked with Simon Rose, Tony Bevan and with synthesizer player Martin Hackett. , Ute Wassermann , John Russell  and trumpeter Rajesh Mehta.
Martin Klapper -amplified toys, Lucas Simonis -guitar, Jean-Michel Van Schouwborg-voice.
The London Improvisers Orchestra , Ensemble Trip-Tik, The Bohman Brothers.
Series of duo CD's with Adrian Northover as The Custodians.
Recent gigs include the Wire Magazine Festival, Whitstable, 26th February.
(Bohman Brothers with Patrizia Paolini).
Duo with Steve Beresford -Piano at the Sage Art Gallery in Newcastle
Performance at  'Rattling Cages' with Ilhan Volkov at the Proms, Royal Albert Hall 17th August. Performed in Twelve Hour Concert. Part of Erase and Reset Festival, Sophlensoele, Berlin,
Performance with Christian Marclay  Tate Modern.
The Full of Noises Festival in Barrow in Furness commissioned a new performance from me for July 2013.
Artist film-maker Helen Petts commissioned me to compose original music  for her Kurt Schwitters related film "Throw Them Up and Let Them Sing".
Performance at Tate Britain as part of the Schwitters in Britain 'Late at the Tate' at which I performed my composition 'Anna Blume' in a duo with Steve Beresford.


Marcello Maglliocchi is an artist born in Bari, Italy in 1957 with a long history and experience, has brought his "sound" on tour in Europe and Japan, has worked with the most significant artists in the world in jazz and improvised music.

He is the creator and organizer of international meetings dedicated to improvisation (the latest in order of time are Clockstop in Noci and Fasano from 2015 to 2018 and Osimu in Taviano / LE 2019 edition), all aimed at building a free network between artists who practice music improvised in the world.

Currently the activity takes shape in sound experiences with musicians from all over the world by participating or organizing different groups of improvisers, video materials, electronics ( The Runcible Quintet, Sezu, The Visitors, to name a few).

He is appreciated by both artists and music critics as one of the most interesting and personal drummers / percussionists in activity.

Adrian is based in London, and plays alto and soprano saxophone, and is also involved in sound production.

He can currently be heard playing on the London club scene with a wide range of musicians, as well as doing solo saxophone performances.
He has made recordings with B Shops for the Poor, The Remote Viewers, Sonicphonics (with Billy Bang), The London Improvisers Orchestra, Ensemble Trip-Tik, Anna Homler,
John Edwards, The Custodians, and various duo CD’s with Adam Bohman,
Tasos Stamou, Daniel Thompson and many others.

He has performed at many international festivals, including the Montreal Jazz Festival, Sound Symposium, Victoriaville, Leipzig Jazz Festival, Tallin Festival, Arkangel Jazz, Freedom Of The City, Bari Jazz and others.

Five and Four by the Runcible Quintet.

Notes Lost In A Field  - The Remote Viewers Trio.

The Dinner Party with Vlad Miller and Pierpaolo Martino.

Precarious Casino, The Custodians Of The Realm , with Adam Bohman and Sue Lynch.