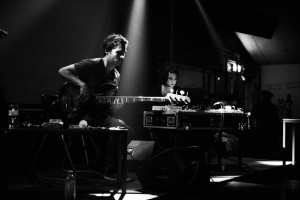 Field recordings of the island of Hvar, Croatia by
Marija Pecnik Kvesic (HRT)

Background info//
The 20’ composition “still unhurt (but also already assaulted by breath)” by Merzouga is based on 20 sets of free-improvisations that we recorded in our studio during the first 20 days of the lockdown in March. When we listened back to the material we found that a lot of our experience of the lockdown and the global crisis was there in our music. Moments of fear, helplessness, a lack of perspective and the complete collapse of our schedule. But also a sense of slowing down, time for reflection about our buzzing, busy life, and even moments of tranquility a sense of warmth and family – all of that was right there in the music. So we decided to create a sound-composition from the material we had collected in our daily-lockdown-improvisations in a second phase of the creative process in April and May 2020. Another sound-art piece of ours had passed the pre-selection at the international radiofestival Prix Marulic. As a hommage to the fact that Prix Marulic, hosted by Croatian broadcaster HRT at the island of Hvar annually for the past 25 years, was cancelled due to the crisis, we asked Marija Pecnik Kvesic, a gifted sound-engineer/sound-artist at HRT, if we could use field-recordings of Hvar she had recorded during the 2019 edition of the festival. The title is a reference to one of our favorite poets, Joseph Kopf and his poem “noch unverletzt, aber auch schon vom atem bedroht” – “still unhurt, but also already assaulted by breath”. Our composition was commissioned by HRT/ars acustica and has not been broadcast yet.

Merzouga I Janko Hanushevsky & Eva Pöpplein
Merzouga is a spot in the Sahara where Cologne-based computer-musician Eva Poepplein and electric-bassist Janko Hanushevsky encountered the roaring silence of camel-flies and sand trickling down the dunes. Led by an abiding curiosity they traveled to India, Lao, Cambodia, Vietnam, Morocco, Ukraine, Brazil and Greenland, where they made extensive field-recordings and sound-research. Since 2002 they have been working together as a duo, producing radio-drama, ars acustica sound-composition and installations, and radio-features, performing and composing music for radio, film and theater. Their radio-works often combine field-recordings, literature and music in one musical, compositional gesture and have won several international awards, and have repeatedly been awarded “Hörspiel des Monats” by Deutsche Akademie der Darstellenden Künste. Their 2019 composition for baritone Holger Falk’s concert program “Gondoliere” premiered at Hamburg’s renowned Elbphilharmonie. Their 2019 sound-installation “Memory Garden” was realized at Museum Schnütgen for Medieval Arts. Commissions for major German broadcasters, such as Deutschlandfunk Kultur, Deutschlandfunk, WDR, HR, RBB, NDR, ZDF/arte, and Finnish broadcaster YLE. Broadcasts by all German ARDbroadcasters, ORF (Austria), SRF (Switzerland) RTÉ Nova (Ireland), and YLEISRADIO (Finland). Their critically acclaimed sound compositions “Mekong Morning Glory” (DKultur 2009) and “52°46’ North 13°29’ East – Music for Wax-Cylinders”, and “De Rerum Natura/Dance of the Elements” were released on CD by the GRUENREKORDER label. Their music has been represented on various compilations, a.o. the GRUENREKORDER 100, Noise of Cologne and on the renowned WIRE TAPPER.